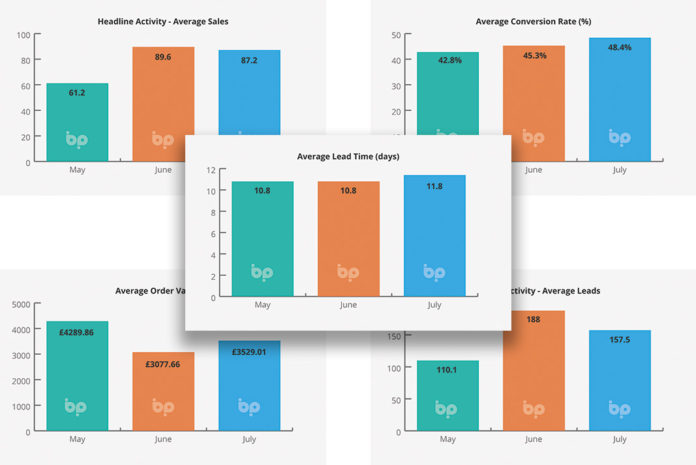 The Government unveiled its plans for the Green Homes Grant at the start of July. Not starting until September – and then likely to offer slim pickings for window and door companies – many within the industry expressed their concern that it was going to dampen demand for windows and doors.

So, did it? We won’t see the full impact (if there is one) until we have figures for August, but the early signs are that it has had a minimal impact, if any, on homeowner purchasing decisions, or at least if it has, other buyers have stepped in.

Average sales in July may have been marginally down (3%) in June, but it’s important to consider this against the 46% jump in sales reported last month on May.

What is perhaps more telling (and perhaps a little more ominous?) is that leads fell away 17% this month on last. How much should we read into that? Well, there are a couple of points to consider. The market demand that the industry has seen since the easing of lockdown has been exceptional. Installers are fitting double what they would normally fit and it was unrealistic to expect these levels to be sustained long term.

In short, we’ve seen leads and orders put on hold going into lockdown released as latent demand coming out of it. This has been met with a new found passion for home improvements among consumers. Sitting around at home as a nation, we’ve turned our ‘collective gaze’ to our properties and we’ve spent and spent on them.

That demand was always going to run out of a little bit of ‘fizz’ going into the autumn as people either came out of furlough and returned to work, or lost their jobs.

In that sense, if the Green Homes Grant did take heat out of the market – and it remains an ‘if’ – that may be no bad thing. Installers are already working on 12-14 week order books, and the supply chain was ‘creaking’ at every level.

At worst, it has pushed a handful of jobs into the autumn which, paradoxically, may be the best that could have happened, because that work has been ‘stored-up for the autumn.

The bigger challenge is what lies beyond October. Local and regional lockdowns are going to be part and parcel of daily life for the rest of this year and at least the first half of next. Unemployment is rising.

These are clear challenges which may make the end of the year difficult for many companies.

Conversely there are also areas of opportunity. According to Zoopla, new home sales in July were running at 28% above pre-lockdown levels as pent up demand converts into transactions. This contributed to year-on-year house price growth for the month of 2.7%.

Homebuyers also have only until 31 March 31 next year to take advantage of the holiday on Stamp Duty. This may lead to a flurry of transactions at the end of this year and the beginning of next, something which should bolster demand in Spring.

There is a lot here in a traditional economic sense, that doesn’t make sense. House prices shouldn’t be holding up against the backdrop of such a massive economic downturn – but they are. The window and door industry shouldn’t be seeing a boom – but it is. COVID-19 has turned things upside down but into the autumn at least, we should continue to benefit.

The Business Pilot Barometer offers a monthly analysis of the key trends defining window and door retail. It draws on real industry data collated by Business Pilot, the cloud-based business management tool developed by installers for installers. To find out more see www.businesspilot.co.uk/barometer

CPA: ‘key fundamentals in the construction sector are positive’