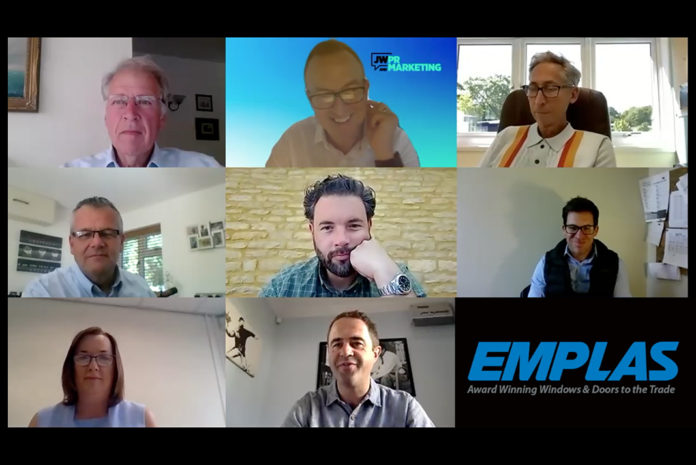 The industry will continue to see high levels of demand through to the end of the year but should brace itself for tougher trading conditions at the start of 2021, according to commentators.

Held at the end of last week (30 July), panellists on a COVID-19 Emplas Roundtable, said that the boom seen in retail and new build had far exceeded their expectations.

Ryan Johnson, managing director, Emplas, said: “What is clear, is that everyone has seen exceptional demand over the summer and with order books still very strong, there is an expectation that this will continue through to the end of the year. “It’s what happens after that that remains less certain,” he added.

Topics of conversation included the Green Homes Grant. Thom Emerson summing up the mood when he compared it to the Green Deal and another ‘missed opportunity’.

This aside, topics of debate included the boom the industry had seen since the easing of lockdown, with all those in attendance reporting a major uplift in demand.

This, however, was highlighted as putting pressure on the supply chain, with the two installers ‘in the room’, KJM Group and Ideal Window Solutions, reporting extended lead times and order books.

Those ‘higher up’ the supply chain, Emplas Ryan Johnson and Epwin Window System’s Clare O’Hara, highlighted how they were adapting their businesses to meet this demand.

Ryan said he had hoped that the Green Homes Grant ‘in a way would have led to some form of cooling of the market’, while Clare added that Epwin Group had invested significantly in additional resourcing to guarantee supply increasing its daily extrusion capacity from 100 to 130 tonnes a day.

The uncertainty that COVID-19 created and the risk of future localised lockdowns was a shared concern. KJM Group’s Mark Pearce, highlighting the rise in cases in Europe, and the importance of keeping customers and employees safe going forward.

This was something that Clare said the industry should be proud of. She said: “We have adapted to a difficult situation, safeguarding the welfare of our workforces, putting in safe working practices in our factories and out on site. We’ve put in new risk assessments and work has carried on and that’s really important.

“And we’re coping as best we can with the rapid growth in demand that we have seen from a standstill start in May.”

Speaking at the roundtable Ryan concluded: “As an industry we’ve put ourselves in a position to take advantage of homeowner demand by coming back when we did, to recover and to give ourselves a fighting chance of a decent future.”

Watch the video below: