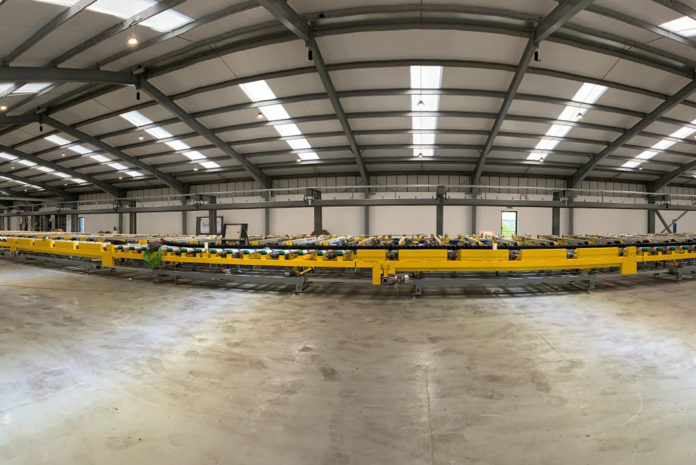 New aluminium systems company, Garnalex (Garner Aluminium Extrusions), has completed the installation of its state-of-the-art aluminium press. Following a reported £9 million investment to date in its manufacturing facility in Derbyshire, Garnalex says that it will begin trade extrusion in September.

Weighing over 170 tonnes, the press was manufactured in Germany and delivered by convoy with police escorts to the Garnalex Nether Heage factory in March. To help visualise what 170 tonnes means, it’s about the same weight as a Blue Whale and nearly as much as three British Army Challenger 2 tanks!

Once commissioned, Garnalex says that its new SMS Hybrex press will produce four tonnes of extruded aluminium an hour.

CEO, Roger Hartshorn, said: “Over 15 working days in June, 44 trucks delivered the rest of the machinery and equipment for our custom-made aluminium press and factory. Unlike most aluminium extruders, we’ve built our state-of-the-art factory from the ground up, and it’s taking shape nicely. Everything is the best it can be, so we’ll start off with a built-in advantage for customers in productivity, efficiency and quality. Trade extrusion will begin in September, and we’re launching our innovative new aluminium window system at the end of Q1 2020.

“Like a lot of the industry, I’ve fallen in love with aluminium,” Roger added. “But unlike PVC-U and timber, aluminium has seen very little development or innovation over the past 30 years. Service in the aluminium sector has also lagged behind the big improvements that fabricators and installers have got used to in PVC-U. So, we’re building in to the Garnalex window and its delivery, all the innovations and improvements that you would have expected to have seen over the last 30 years. In fact, Garnalex aims to reinvent the way aluminium windows and doors are fabricated, installed and sold, transforming the customer experience end to end.

“We see ourselves as being on a journey to transform fabricators’ and installers’ experience of buying aluminium systems and aluminium windows, by making it easier and better to fabricate, install and sell aluminium. We’re also designing what we think will be a very beautiful window. Those fabricators and installers who’ve seen it agree. Garnalex is aluminium, but not as you know it!”

Fabricators and installers who want to learn about this new window system and be among the first to sell it, can sign up in August for the company’s ‘ambassador workshops’ by visiting www.garnalex.co.uk. Garnalex will be running a series of workshops from September 2019.