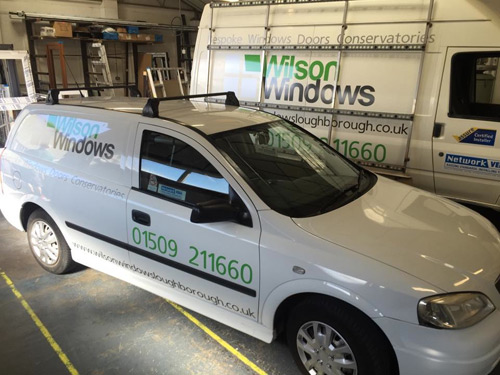 Loughborough based installer, Wilson Windows, recently switched supplier to The Veka UK Group after 26 years with its previous systems company.

Dale Wilson, director at the family-run firm commented: “It’s the best decision we’ve ever made!”

The company, which was established in 1984 by Dale’s father Michael, is now co-directed by husband-and-wife team Dale and Karen Wilson, with their son Callum having joined recently too.

“It was Karen that suggested we extend our offering with a new window option,” Dale explained. “There are numerous companies within our target area that were stocking the same systems as us. We wanted to differentiate ourselves and widen our audience in the process.

“Over time, we’d become disillusioned with our previous supplier. The support promised in their promotional materials never seemed to materialise; when systems changed, no training was provided; and if issues arose as a result, they did everything possible to distance themselves.

“I have a contact at Glazerite – which now fabricates our windows – who invited us to view some Veka systems, and we’ve not looked back since! There’s a better product range than with our previous supplier, and that’s already been reflected in an increased uptake since we made the move. At the moment we’re booking in jobs for three month’s time – a great start to our relationship with Veka. We couldn’t be happier!”

Besides its product range, The Veka UK Group is also renowned for its industry leading packages of installer support, boasting both the Approved Installer Scheme and Network Veka – the first UK organisation of its kind.

“When Karen Lund travelled down to speak to us about Network Veka, I have to admit, I was slightly dubious about how ‘real’ the benefits could be. It was just before the annual Network Veka Awards, so Karen invited us along to meet the member companies and hear what they had to say.

“I’m so glad we signed up. Network Veka delivers where rival offerings from our previous supplier fell flat. The marketing support is brilliant for awareness – we’re even about to install some of the Steve Davis liveries onto our vans, which is a great conversation starter if nothing else! Customers love the deposit protection, insurance-backed guarantees and other incentives and, to be honest, it just ‘feels’ better to sell as a Network Veka member. We know the standard of our work is great and, with the Network behind us, customers have that confidence too.

“We’ve been better rewarded in the short time we’ve been with Veka than in 26 years of loyalty to our previous supplier. Where we previously were made to feel ‘honoured’ to stock a supplier’s products, we now feel valued and supported – I only wish we’d made the move sooner.

“Last year was our 30th anniversary. This year marks the start of a new era for Wilson Windows with The Veka UK Group alongside us. We’re extending our showroom and hope to showcase the changes at a Christmas open day. And, with Network Veka’s assurance that we will remain their only accredited installer in our area, we look forward to our increased work flow continuing!”