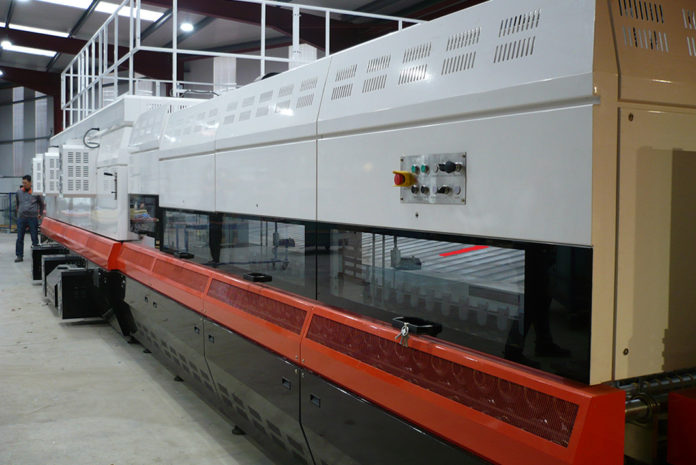 Apeer has announced its second major investment in as many months, unveiling a new £750,000 toughening line to stay ahead of ‘exponential’ growth of its radical Lumi and Lumi2 windows and doors.

Demand for the Lumi range is reported to have trebled in the last year alone and the introduction of the retrofit-friendly Lumi2 system has boosted that growth even further, says the company. The commissioning of the bigger second line covers that and more by quadrupling output but also responds to architects’ demands for ever larger expanses of glass.

The new Northglass AG-series Forced Convection furnace from Lambert GT Services can not only handle glass up to 5m X 2.8m – almost four times the area of the existing line – but is also highly energy-efficient and gives an improved surface finish to the glass with less ‘roller wave’.

Apeer’s R&D manager, Robert Foster, said: “The biggest single pane for any Lumi window we’ve made so far has been 3m X 2m but the clean, contemporary lines of the system mean that architects are constantly looking to use it in bigger and bigger expanses.

“The new line means we can go on meeting their requirements as well as taking much more future growth in our stride for a long time to come. And while we don’t expect many oversize panes with the retrofit nature of Lumi2, the improved surface will bring real benefits here too.”

The latest investment comes less than three months after the company installed a second high-tech paint line at its County Antrim production unit to stay ahead of demand for its composite door ranges. The line also increases efficiency by enabling different colours inside and out to be completed in a single pass.

Lumi has continued to grow at a pace since it was launched at the Grand Designs exhibition in 2015. Since then, the window system has been joined by a door and lift/slide patio door systems, then earlier this year by the retrofit-friendly, 70mm double-glazed Lumi2.
The Lumi system is the latest range of products from Apeer, which also includes its Traditional, Contemporary and the ultra-contemporary Modo composite door collections.