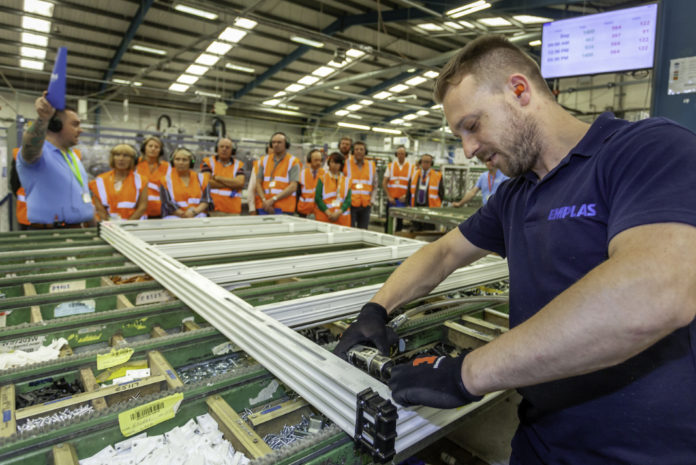 A new customer poll has found more than two thirds of Emplas’ existing customers gave the trade fabricator a nine or 10 out of 10 for support and service.

Conducted earlier this year, the study was designed to benchmark Emplas’ performance and identify areas where there was scope to do better as part of a commitment to continuous improvement.

This included the use of the Net Promoter Score metric, which is widely adopted by Fortune 1000 Companies and calculated on a single question: ‘how likely are you to recommend a company, its products and service, to someone else?’

With two thirds of respondents falling into the promoter camp, this gave Emplas a Net Promoter Score of 58.5%.

“The result was exceptional,” said Roberto Canassa, IT and customer experience director, Emplas. “Anything above zero is seen as a positive. A Net Promoter Score of almost 60% is absolutely first class.

“Our focus now will be on picking up on the very important feedback we received from those customers who didn’t give us a ranking of eight or above to understand why and identify areas for improvement.”

In addition to the NPS metric, the survey also included a detailed assessment of all customer touch points with 91% of respondents stating that they were either satisfied or very satisfied with the support that they received from their dedicated customer coordinator. Emplas’ ordering process, which includes 24/7 online ordering through the EVA portal, was rated as excellent by 72% of respondents. Product quality was rated as excellent by almost 60% of those responding.

“The survey results weren’t entirely complimentary. It identified a number of areas for improvement, including our returns process,” continued Roberto. “That is, however, the point. We want to know where we are getting it wrong just as much as where we’re getting it right,” he added.

Emplas’ growth has been underpinned by a programme of continuous development, committing to a more than £5m spend on new factory extension, machinery and infrastructure since April 2017.

This has included a £1.4m spend on new machinery, including the purchase of a second Schirmer machining and cutting centre, multiple Rotox welders and saws, bringing its weekly capacity up to 3,200 frames across two shifts. The second Schirmer gave the fabricator two fully automated window lines with 90% of products going through just two Rotox 8-head welders.

Emplas has also added a Graf SLS seamless sill welder, which employs the same principles as the Graf SL4FF, to manufacture a seamless bay window sill, to its offer last year, alongside a six-figure investment in further integration of its IT systems.

Ryan Johnson, managing director at Emplas, said that the results of the customer poll were encouraging but that they represented the start of a process: “We’re clearly pleased by the results we’ve seen. The team here is very committed to do everything it can to support our customers but we’re not perfect, we don’t get it right every time and we need to learn from those experiences.

“Ultimately, what we do needs to work for each and every one of our customers, as close as we can get it to all of the time. We’re committed to service excellence and while we’re on the right road, there is still some way to go.

“The most important thing for me personally, is that we’re very much on that journey with our customers and through a genuine commitment to partnership working, will grow and move forward into the future with them.”