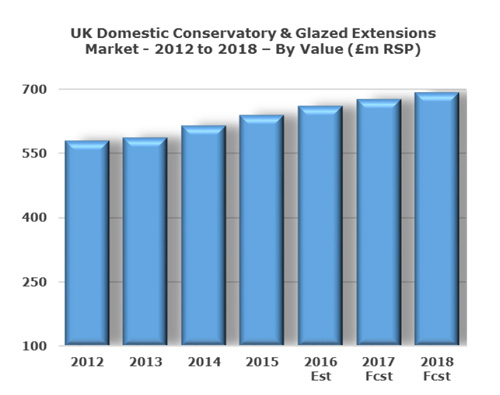 The conservatory and glazed extensions market was estimated have increased by around 3% in 2016.

A combination of a continued recovery in the economy in general – and the housing market in particular are said to have helped underpin rising consumer confidence and spending on higher value home improvements in recent years, particularly with interest rates so low.

Until recently, the UK conservatory market had been in decline for some years, with the ‘aspirational’ appeal of the traditional conservatory waning in the latter half of the 2000s – a situation which was further exacerbated by the financial crisis.

Recent years have seen some recovery in the market, however, while value growth has been ‘relatively good’ in recent years, volume growth is less buoyant with only 1-2% increases over the last two years, and only modest volume increases currently forecast to 2020.

In 2016, AMA says the market is quite sophisticated in terms of product range and offers more options for an individualised project. Consumers installing modern conservatories in their home now expect them to be used as living spaces throughout the year, rather than only during warmer weather as was previously the case.

AMA estimates that prices have been rising year on year over the past few years, despite volume fluctuations, primarily reflecting an overall increase in specification levels. For installers, there remains a significant squeeze on margins, particularly in the budget sector, but some installers have addressed this issue by diversifying and offering a wider range of products than traditional conservatory/window companies, with examples including solar panels, alarm systems or driveways, among other products.

In terms of frame materials, PVC-U continues to dominate, but timber also retains a ‘significant share’ according to AMA, based on its attraction for many homeowners due to its natural appearance and sustainability credentials. Aluminium remains a ‘more expensive option’, though it has retained a niche share in the domestic market and aluminium bi-fold doors, particularly, have gained what AMA describes as ‘widespread consumer acceptance’.

Jane Tarver of AMA Research, said: “Market improvement in 2017 and beyond is likely to be driven by levels of house moving/home extension building, consumer confidence and growth in the retrofit/upgrade market – particularly if interest rates remain at historically low levels.

“However, the future economic landscape is tempered by the uncertainty surrounding the commencement and potential effects of Brexit.”

Substantial increases in volumes or value are not forecast in new conservatory demand in the short-medium term. Current forecasts indicate modest growth in overall value of sales, but according to AMA, this is likely to be underpinned by the continuing interest in upgrading or replacing older conservatories with higher specification products. In addition, AMA estimates that annual volumes are likely to remain below 100,000 in the short-medium term.

Ultimately says AMA, conservatories/extensions are a ‘deferrable purchase’ and sales volumes are heavily dependent on economic conditions, making future demand year on year difficult to forecast in the current climate.

The ‘Domestic Conservatory and Glazed Extensions Market Report – UK 2016-2020 Analysis’ report from AMA Research is available now and can be ordered online at www.amaresearch.co.uk or by calling 01242 235724.