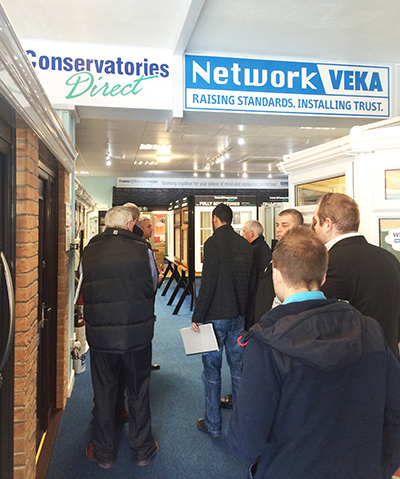 Since joining Network Veka, the Bury St Edmunds based company has claimed awards for best newcomer in 2014 and national overall winner in the two subsequent years, at the organisation’s Annual General Meeting and prize-giving.

Adrian Lewis, MD at FCD, explained: “Being a Network Veka member has been hugely instrumental in our continuing success, largely as we have embraced the numerous benefits that the organisation provides. For our part, today we aimed to showcase to other, perhaps smaller member companies, approaches to marketing, data gathering, and lead generation that they may not have considered, and ways that the Network’s provision can support them in practice.”

Ross Billings, assistant manager at Rainham’s The Glasshouse agreed: “The day was a great insight into a larger company’s way of doing things. The showroom was amazing and has an example of everything a customer could possibly want to see. We were given some great marketing ideas and FCD has sent us some marketing campaigns to edit and use, which is a great help.”

Craig Turner, director at Turner Windows of Somerton, highlighted the ability – thanks to the geographical spread of Network Veka members – for companies to share knowledge without jeopardising their own business’ prowess: “Well worth the 8.5 hour round trip to meet FCD. Very impressed with the showroom and their marketing initiatives. They have given me some good ideas for my own company, which I will put into practice. It’s good that we are able to meet other NV members who we are not in competition with, and have an open discussion about our businesses.”

Simon Wade, director at Rugby Double Glazing was grateful for the rare opportunity to hear perspectives from peers in the same business: “If we weren’t members of Network Veka, how much would it cost to get that level of information? Thank you for the opportunity to speak to other Network members and especially to Adrian and FCD for such an in-depth presentation.”

Paul Nugent, owner and MD at Malvern Glass agreed: “Networking is what Network Veka is all about and that’s why we are part of it. We want the opportunity to meet like-minded professionals, exchange ideas and share experiences. FCD is an impressive set up and has given me some excellent ideas for the future.” These sentiments were echoed by Paul Lewington, owner and MD at Reading’s Lewington & Son: “FCD showed a very professional use of the Network Veka branding, and it was a great opportunity to meet other NV members from different areas.”