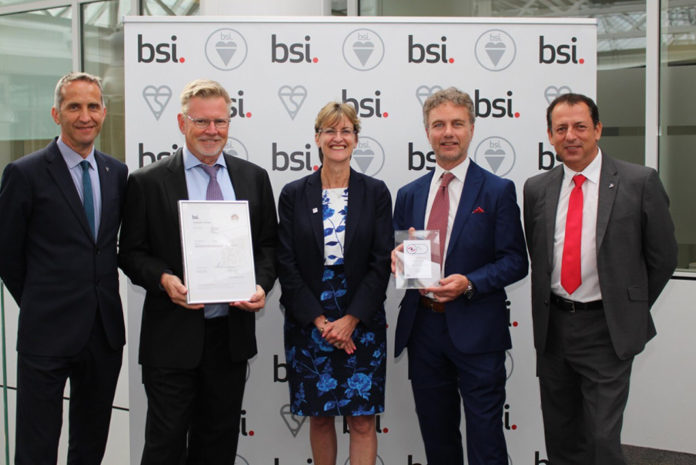 Mighton has been officially presented with a certificate from the British Standards Institution (BSI) in recognition of achieving the Government’s Code of Practice for consumer Internet of Things (IoT) security for its Avia Apple HomeKit smart lock – the first ever product of any kind to receive the ETSI TS 103 645 accreditation.

The Code of Practice, which is recognised internationally, was introduced by the UK Government in October 2018, in response to growing concern about the cyber security of smart enabled devices in the home. Not only does the standard help to ensure the privacy and security of consumers when using their smart home products, it is also designed to prevent the threat of Distributed Denial of Service (DDoS) attacks that are launched from poorly secured IoT devices.

Avia – which carries PAS 24 accreditation and features 256-bit data encryption for enhanced security – is the first Apple HomeKit lever operated smart multipoint lock. Available to UK trade customers exclusively through hardware distributor, Mila, it is a ‘full function’ lock that can be controlled using iPad, iPhone, Apple Watch, keypad and fob, combined with the peace of mind of a traditional key and TS 007 3-star cylinder. Access via facial recognition is another exciting innovation that can be activated by an optional accessory.

Once connected to the Apple HomeKit platform, homeowners can check on the status of their entrance door via the Avia app, including a full audit trail that records all activity, and can also extend and control access to additional users – for example service providers – from anywhere in the world.

Room with a view