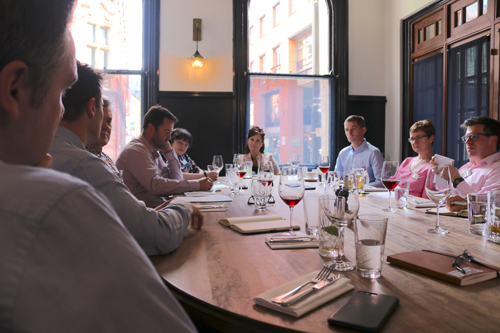 The recruitment and retention of shop floor staff combined with a failure to attract younger workers into the industry, threaten the long-term sustainability of the glass and glazing sector, according to commentators.

The warning was made at a roundtable forum discussion hosted by Bohle in Manchester at the end of last week.

Attendees argued that while improving skills within the industry was important, it was its’ failure to appeal to younger workers that represented the greater challenge and threat.

Christina Moorhouse, managing director, Oakland Glass, said: “If we can get the right people with the right attitude, we can train them. It’s attracting those people in the first place that we find difficult because those people aren’t thinking about a career in glass.”

This was a theme developed by Matthew Kirby, director of distribution for Saint Gobain Glass, who argued that ‘shop floor’ recruitment had become increasingly challenging. “It’s at the maintenance engineer, the driver end – shop floor roles are becoming increasingly difficult to recruit for.”

He continued: “We talk about skills but it’s actually about finding people with the right attitude and the right behaviours and who want to work in or handle glass.”

He added that the industry was losing out to other sectors, something which was particularly acute in London and the South East, where wage inflation had compounded pressures.

Martin Clarke, managing director of Bootle Glass, said that it had struggled to attract younger workers. He said: “Of the 18 people we have working for us, there is one who is under 50 – and he’s 28.

“Our guys have a vast amount of knowledge and no one to pass it on to.”

The GGF’s newly appointed head of training and membership, Richard Hearn, picked up on comments regarding challenges around retention of younger workers. “You aren’t going to hold on to the right people unless you can offer them a package. It’s not just about money but culture, giving people a reason to stay and a career path.”

This was a point picked up on by Moorhouse, who said that Oakland Glass had encountered similar challenges in attracting and retaining younger workers but had, through concerted effort, had developed a more balanced age demographic within its workforce.

This had been delivered in part through a training partnership with the Vocational College. Its business development manager, Paul Gray, argued that support was there for companies but awareness of how to access it, was low.

“If you’re employing less than 50 staff and they recruit a 16-18 year old apprentice, the Government will fund the cost of the training and assessment in full. It’s effectively free money for training but people need to access it.”

He added that there were initiatives in place to encourage glass companies to invest in training, including the GQA’s new Building Our Skills campaign, which he encouraged the industry to support.

Gray also commented that an unintended consequence of the launch of minimal technical competency schemes had been a downgrading of training and skills within the industry, which he argued had contributed to the challenges it now faced.

Hearn added that, as a consumer, you ‘didn’t want the minimum of anything’. He said that the GGF was currently working to encourage higher levels of professionalism and increased standards within the industry at a point of retail.

However, he came under pressure from attending media, who asked what the GGF was doing to engage with a new generation of potential recruits?

This was also touched on by Moorhouse, who said that the industry still suffered from an image problem. “It’s still seen as full of old fashioned double-glazing sharks operating out of garages. We know it’s not that anymore but that’s not being communicated effectively in schools,” she argued.

Bohle’s Dave Broxton, who chaired the event, suggested that there were lessons for the UK to draw from Germany, where the glass processing sector had engaged effectively with students and school leavers. He added that the sector was viewed with a higher degree of professionalism, with established training programmes and standards, including its Master Glazier scheme.

When asked by Broxton for suggested actions to improve recruitment, training and retention, responses included a combined effort from industry, representative organisations and the trade media to increase awareness of funding and support for training including funding under the Apprentice Levy.

There were also calls for the GGF to do more to reach out to schools through an educational programme and for businesses to undertake the same task locally.

“What we’ve seen today is the incredible passion that exists within our sector and a real willingness to drive change and make a difference. There is clearly an opportunity to improve skills, in part by increasing awareness of and access to the funding that is available to support training,” said Broxton.

He concluded: “What is also clear is that this needs to be accompanied by a concerted effort to reach out to new audiences and to promote glass to young people. As an individual business we will now commit to do this within those local communities in which we work.”