Universal Arches claims it came away with the ‘bragging rights’ for the most leads generated from the FIT Show, while it also celebrated 20 years in business.

,Although the 1,736 leads generated was down from 2,087 in 2013, the footfall was still ‘highly impressive’ according to Universal, with stand visitors attempting to open up an arched composite door for a chance to win an iPad Air. The lucky winner, picked out by Matthew Glover, chairman of the FIT Show, was Richard Hammond, sales and marketing director of Cutting Edge UPVC.

,Products featured included an impressive metallic blue gable frame, along with a fully fabricated Universal Arches logo that involved five bends and 67 welds, taking 35 man-hours to create in total. There was also an arched sliding sash window and arched shutters, courtesy of Universal’s exclusive relationship with blind and shutter specialist, Thomas Sanderson. The company also promoted its exclusive partnership agreements with Eclectic Systems, for its Residence 9 system, and Solidor, for the arched composite door.

,Leon Day, managing director of Universal Arches, commented: “Yet again, we led the bending sector at the show, whilst demonstrating our joint product development programmes with Residence 9, Solidor and Thomas Sanderson. It was also great to be able to share our 20th anniversary with the glazing industry as a whole.” 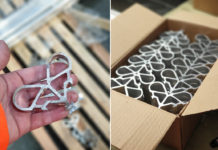 Cutting the cost of corners 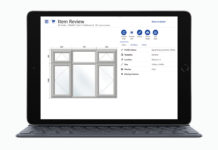 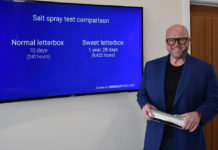