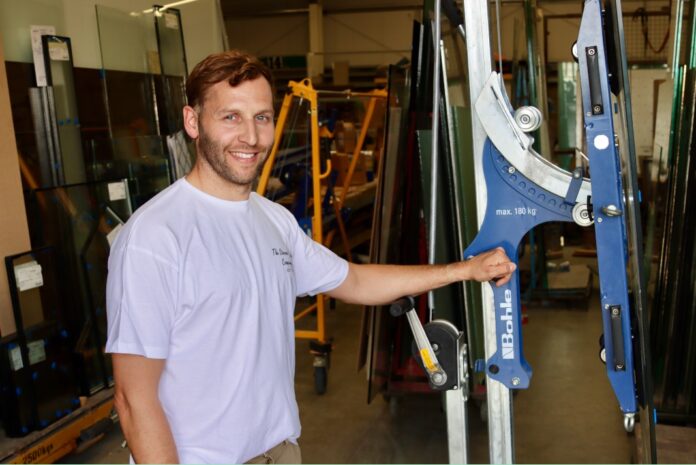 Suffolk-based Stowmarket Glass has invested in a Liftmaster Quadro from Bohle to help complete a project at Colchester Hospital. The family-owned glass company was tasked with supplying fire-rated, walk-on flat rooflights, which formed part of a courtyard refurbishment at the hospital. The units were made using one sheet of 25mm toughened laminate and one of 23mm fire-rated glass.

“The units ended up weighing 390kg each,” said Luke Browes, Stowmarket Glass’ managing director. “Once we received the specification, our first point of call was Bohle to see if we could purchase a product that would do that job. They were able to do it within 24 hours.”

Luke explained that Stowmarket staff received the order almost as soon as the quote was submitted, and had all products ready to go within four weeks. But due to health, safety and access issues on site from the main contractor, the project was put on hold for 10 months. When clearance was given, Stowmarket had to react quickly to meet an allocated time slot on site.

“We got a phone call on the Thursday afternoon saying they needed it installed on the Saturday,” Luke explained. “We immediately made a phone call to our rep Mike Turner, who had the Liftmaster Quadro delivered to us on the Friday, and we installed the product on the Saturday. We were on site by 9am and all done by midday.”

The Liftmaster Quadro comes in different capacity options: 300kg lifter, which can be extended to 600kg through the use of four additional extension arms, or a 400kg option which can be extended to 800kg. The Liftmaster Quadro can also be packed down to fit on a dedicated transport frame, reportedly making handling and storage simple. Running off a standard Li-ion battery, it can be used on site in addition to the manufacturing environment. It is also able to fit into the back of a city van.

“We were in a very exposed area of the hospital and we wanted to make sure that we had the very latest equipment that we could be 100% confident in,” Luke added. “That’s why we purchased the Liftmaster Quadro direct from Bohle. It’s TUV-approved, and it’s a product you can trust.

“When you’re lifting a piece of glass that weighs around 500kg, worth thousands of pounds, and it’s going to go six stories over a building, you want something safe. Bohle provided that.”

Stowmarket is a long-term regular Bohle customer. The business’ representatives have previously bought several lifting devices from Bohle, including Veribor suction lifters and the Liftmaster B1 Lifting System – a powerful machine that can fit in the back of a small vehicle.

“We had a new health and safety officer from the construction company we working for, and this was the first project they oversaw,” Luke said. “So, we want to make sure we did everything we could to do a smooth fast install without any issues whatsoever.”