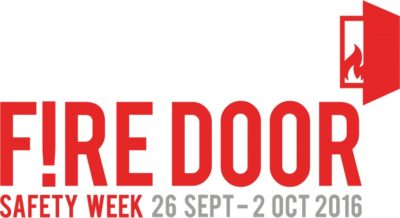 Fire Door Safety Week is shaping up to be the biggest and best yet, with cross industry support and a growing army of high profile backers contributing to a range of activities and creative plans that also commemorate the 350th anniversary of the Great Fire of London, the event which gave rise to the ‘fire door’.

The award winning campaign, which runs from 26 September – 2 October 2016, aims to raise awareness of the critical role that fire doors play in protecting property and saving lives.

Run by the British Woodworking Federation, the BWF-Certifire Fire Door Scheme and the Fire Door Inspection Scheme (FDIS), the campaign focuses on helping those responsible for building specification, installation and maintenance/management of fire doors and highlights the risks that unsatisfactory fire doors present to property and lives.

This year particular focus will be on the high risk areas of Houses in Multiple Occupancy (HMO), private rented, council and social housing, sheltered housing and care homes.

Support for the campaign has already been pledged from South Wales, West Midlands and London fire and rescue services, as well as a significant number of companies in the door and hardware industries.

It is also backed by the government’s Fire Kills campaign, the Fire Sector Federation, the Association for Specialist Fire Protection (ASFP), Children’s Burns Trust (CBT) and the Guild of Architectural Ironmongers (GAI).

Hannah Mansell, BWF-Certifire scheme manager and Fire Door Safety Week spokesperson said: “From April 2014 to March 2015 there were 28,200 dwelling fires in England alone. Deaths from these fires contributed to nearly two thirds of the total fire fatalities in that time frame. This is why we continue to campaign for changes in legislation and to educate people on the importance of fire doors. A properly installed fire door can save your life.”

Housing landlords need to be fully informed of their responsibilities under the Regulatory Reform (Fire Safety) Order 2005, and to understand the correct specification, supply, installation, operation, inspection and maintenance of fire doors. Building owners, facilities and estates managers have a legal duty to appoint a ‘responsible person’, who is accountable for the fire safety in the building that they own or manage, to ensure that the fire doors installed comply with current legislation.

Research by FDIS found that more than £450,000 in fines was issued to the landlords and managers of HMOs during 2015, as well as a number of custodial and suspended sentences.

Hannah Mansell continued: “Last year was a resounding success for Fire Door Safety Week with 129 organisations pledging support and many running events. This year we want to build on that momentum by encouraging even more fire services, local councils and stakeholders to get involved and help us to spread the fire door safety message.”

London Fire Brigade is working with BWF-Certifire to deliver a fire door safety conference to its fire safety teams across London on 29 September 2016.

BWF-Certifire is also working on a new social media campaign, Click It, Kick It – this campaign wages war on the lethal fire door wedge. In the Click It, Kick It campaign anyone who sees a fire door being wedged open is urged to take a photo (Click It), to share on social media using the hashtag #ClickItKickIt, and then to kick the wedge away (Kick It) so the door can close. It is important that any instances where fire doors have been wedged open are reported to the building owner or manager.

Any confiscated or donated wedges will feature in a piece of artwork that will be unveiled at a reception on 2 September. The event, hosted by BWF-Certifire, marks 350 years to the day since the Great Fire of London broke out. For every wedge donated, BWF-Certifire will be donating an amount of money to the Children’s Burns Trust.

David Oldfield, chairman of BWF-Certifire, said: “Click It, Kick It is all about raising awareness of the importance of keeping fire doors in good working order. People don’t realise that properly specified fire doors provide a barrier to stop the spread of fire and smoke and can last between 30 and 60 minutes, depending on the door. In an emergency, every second counts. Time is critical and can be the difference between life and death. If the door is wedged open then it can’t protect us – wedging open fire doors are a bad habit we have to break.

“This year is particularly significant as it raises the question why after 350 years have we not nailed this. The wedge is just part of a legacy of neglect arising from historically poor specification, installation, maintenance and management of fire doors. There is no excuse for poor fire door safety. Corners have been cut and bad decisions have been made, but we hope through Fire Door Safety week to stop the rot and restart the market.”

The Fire Door Safety Week website offers tailored advice to those who are responsible for fire safety. This advice covers a range of sectors including housing, schools and hospitals.

There are also free resources in an online toolkit to help spread the word about fire door safety. These include technical checklists to help with fire door inspections, videos and posters that can be used in any private, public or multiple occupancy building to educate people on basic fire door rules.

There are also many other ways to get involved, including promoting the message of Fire Door Safety Week on websites and social media, running events, carrying out full onsite inspections and sending any images of dodgy fire doors to Theodore Firedoor’s Facebook page.

Follow @FDSafetyWeek on Twitter for campaign news and updates, or look out for tweets using the hashtag #FireDoorSafetyWeek. 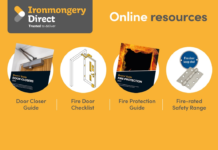 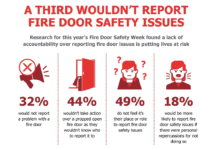 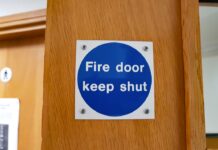