The frameless Lumi system from Apeer was recently used in a large scale renovation project for the director of Dublin based Harvest Energy.

Jason Peters had replaced the windows and doors at his property only two years ago but, following the launch of the revolutionary Lumi System at the Grand Designs Show in 2015, decided on a full refurbishment project using all Lumi products.

Jason Lucas, Harvest Energy’s head of sales, explained: “The renovation included nine windows finished in anthracite grey and AnTeak on the interior, as well as a front door with side panel finished in light grey. It looks fantastic and is a great example of using the Lumi system for refurbishment projects. A lot of customers we meet initially enquire about traditionally styled windows and doors but change their minds after seeing Lumi. Since we added the system to our product offering, we have completed six Lumi installations and are starting to see customers go full circle – opting for a Lumi door to start with and then deciding at a later date to get the windows as well. It really is a superior product. In my 17 years in the trade, I have never seen anything like Lumi; it’s the Rolls Royce of windows.”

Lumi is a structurally glazed range of windows and doors that don’t have the profile material on show, and instead has clean sharp lines and edge-to-edge glazing. In ‘true Apeer style’, Lumi is said to be set apart from its peers with a ‘ground-breaking’ design and technology.

Linda Tomb, marketing manager at Apeer, said: “We have always strived to stay one step ahead of the curve; Lumi brings all the design benefits of frameless glazing with all the strength, security and internal styling of more traditional windows and doors. There isn’t anything that has been designed for the window market like this before.”

Jason added: “We have been fabricating and installing Apeer doors for seven years now, and believe them to be the highest standard of composite door on the market.”

Harvest Energy specialises in windows, doors and construction and has two manufacturing facilities, as well as showrooms located in Skerries and Rathfarnham; the latter opening in February this year, both of which showcase the Lumi range of windows and doors. To contact Harvest Energy call 01 8021800 or visit www.harvestenergy.ie. 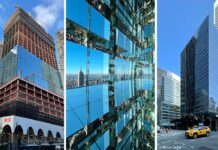 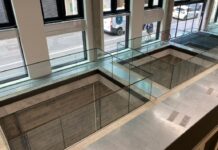 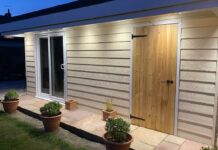 From garage to garden room