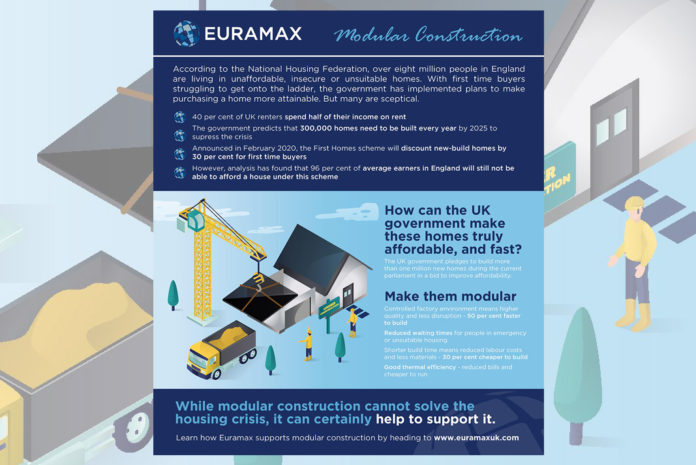 Yorkshire based window and door manufacturer, Euramax, has released an infographic that outlines the issue of affordable homes for first time buyers. Following the UK government’s recent creation of a First Homes scheme, many homeowners still remain uncertain that they will have enough funds to make it onto the property ladder.

In order to create enough homes to meet demand, the government has predicted that over 300,000 homes must be built each year until 2025. A lack of housing is not the only factor affecting the UK housing market. Many first-time buyers are unable to get onto the property ladder due to the high cost of an initial deposit. To help first time buyers, the government announced the First Homes scheme in February 2020.

The scheme, which has been prioritised for key workers such as those in the Armed Forces, police and teachers, will offer a 30% discount on new homes. However, analysis by homeless charity Shelter has found that 96% of average earners would still not be able to afford a home under this scheme.

According to Euramax, modular construction has become a standout method in the construction industry. Builds can be completed quicker and because fewer resources are required in their construction, they are usually cheaper to build and buy. This, it argues, could offer a more affordable solution for first time buyers struggling to get onto the property ladder.

Euramax originally supplied windows for narrow boats and the static and touring caravan market, before expanding into the modular and offsite construction sectors in 2019.

“Though Euramax has not supplied into the modular sector as long as it has caravans, assessing the industry and connecting with professionals has helped us to gain a strong insight into the potential of modular construction,” said managing director, Nick Cowley. “We now supply our products to a number of modular home manufacturers across the country.

“Modular constructions can be built up to 50% faster than traditional brick and mortar homes. This quick completion time has recently helped to build emergency hospitals and additional wards, as well as school classrooms. Modular builds can be completed quicker because the build is prefabricated offsite, in a factory-controlled environment.

“Unlike traditionally built homes that require extensive site preparation before construction can commence, fabrication of the modules can start right away. Because a modular build is predominantly constructed offsite, there is little disruption from factors such as the weather and quality checks can be carried out beforehand.

“It’s clear to see that a lot more must be done to help more first-time buyers enter the property market. That’s why we are dedicated to supporting this industry and recently supplied modular home manufacturer Ilke Homes, with windows and doors for 2,000 of their modular homes,” added Cowley.