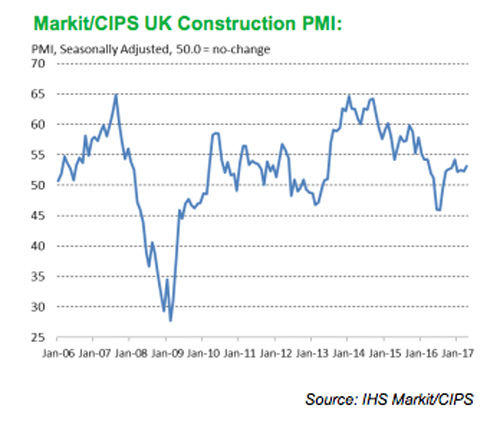 UK construction companies reported a solid start to the second quarter of 2017, helped by faster rises in civil engineering and residential building activity. April data also pointed to the strongest upturn in incoming new work so far this year, which survey respondents linked to the resilient economic backdrop and a sustained improvement in client demand. Greater workloads underpinned a further increase in employment numbers and the most marked rise in input buying since November 2016.

Meanwhile, robust demand for construction materials and upward pressure on costs from sterling depreciation resulted in another steep increase in input prices during April.

At 53.1, up from 52.2 in March, the seasonally adjusted Markit/CIPS UK Construction Purchasing Managers’ Index (PMI) pointed to a solid rise in overall construction output. The latest reading was well below the post-crisis peak seen in January 2014 (64.6), but still signalled the sharpest rate of expansion so far this year.

Civil engineering was the best performing sub-category of construction activity in April, with the rate of expansion the fastest since March 2016. Growth of residential building also accelerated, reaching a four-month high. Commercial building work increased only slightly and at a weaker pace than in March.

Tim Moore, Senior Economist at IHS Markit and author of the Markit/CIPS Construction PMI said: “April’s survey reveals a positive start to the second quarter of 2017, with a robust upturn in civil engineering activity helping to boost the construction industry. There were also more encouraging signs from the house building sector, as growth recovered to its strongest so far this year. However, the performance of the commercial building sector remained subdued in the context of the past four years.

“UK construction companies noted that the resilient economic backdrop helped to drive up client spending in April. Greater workloads led to the fastest pace of job creation since May 2016 and a continued squeeze on sub-contractor availability.

“Supply chain pressures also intensified, as highlighted by the largest lengthening of delivery times for almost two years. A sharp rate of input cost inflation persisted in April, reflecting an ongoing pass through of higher commodity prices, imported goods and energy costs. However, the recent recovery in sterling may have started to help limit some cost pressures in April, as the overall rate of input price inflation moderated to a six-month low.”