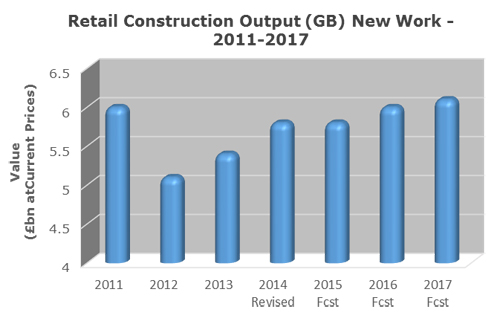 AMA Research reports that the rise of online shopping, a concentration on the convenience sector and the growth of discount stores, has lead to changes in the UK retail construction pipeline.

Total UK retail sales are said to have been boosted by an increase in online sales in recent years and the industry has performed strongly to date in 2015, with food sales generally buoyant and consumer confidence returning. Retail construction output saw a return to growth in 2013, driven by an uplift in consumer confidence, followed by a 2% increase in 2014/15, as positive factors such as low inflation and interest rates, rising real incomes and positive house price growth continued to support the market.

According to AMA, retail construction, whilst challenging for the contractor and offering slim margins, offers repeated high volumes of work, especially in the grocery sector. Sectors such as food retail, where capital expenditure has remained relatively strong until recently, have been areas offering opportunities for contractors throughout the downturn. However, the retail market continues to be driven by structural changes due to the growth of online shopping. Profit margins for traditional retailers continue to be squeezed by a combination of online sales, changing consumer habits and intense competition from discounters such as Aldi and Lidl.

Driven by the rise of online shopping and with a strategy based on major expansion into the convenience market, the construction requirements of the retail sector are changing significantly, with short-term contracts now a marked feature of the market.

“Whilst retail contractors are likely to see more work coming through in 2016, the value and size of projects have changed with an emphasis on smaller refurbishment, particularly for the convenience and discount sectors in urban locations,” said Jane Tarver of AMA Research. “Store rationalisation by many of the largest grocery and non-food chains looks likely to continue, with non-food retailers in particular focusing on major national hubs in shopping centres and out-of-town retail parks.”

The extent and speed of the recovery in the retail sector will remain dependent on consumer confidence and spending levels and current forecasts indicate total annual output increases of around 3% per annum to 2017, when new work output is forecast to reach £6.1bn. Into the medium-term, the retail sector is facing significant structural changes with the continuing growth of internet shopping likely to increase demand for warehousing space but also declining demand for traditional retail outlets, particularly in high street locations.

The ‘Retail Construction and Refurbishment Market Report – UK 2015-2019 Analysis’ is published by AMA Research and can be ordered online at www.amaresearch.co.uk