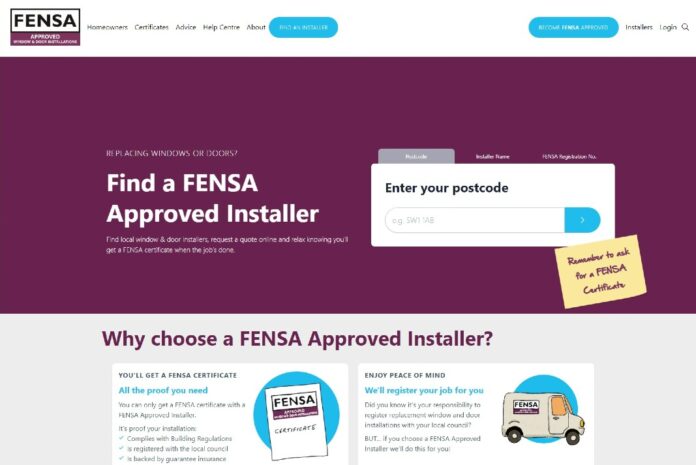 The directors of Fensa, the UK window and door industry’s leading competent persons scheme, have reported the discovery of two historical system anomalies, as well as the fixes they’ve put in place to address them. The anomalies were found during a review and overhaul of the organisation’s IT-based administration systems, and they concern insurance-backed guarantees (IBGs) to homeowners. A second matter relates to the duplication of sales invoices created for certificate registration fees issued to Fensa’s approved installers.

The review team found that the computerised process by which IBG providers should have been automatically advised to create a policy for a homeowner had not operated as it should. Approximately 35,000 installations have been affected since mandatory IBGs became a requirement for competent person schemes in 2014, according to Fensa representatives.

Although there have been no claims by homeowners to whom IBG policies should have been issued, an appropriate fund has now been set aside for any historical claims that may be revealed through a process designed to allow homeowners to make a claim. Any remedial work required as a result of claims being supported are to be carried out in line with standard IBG policy terms and conditions.

The review also revealed that some Fensa certificate registrations had been duplicated. These relate to fees charged to Fensa-approved installers for the registration of completed installations and the issue of Fensa certificates to homeowners. The duplication of invoices is set to be simply resolved by issuing credit notes of the duplicated sums to the Fensa-approved installers affected. The total number of duplications are less than 0.2% of registrations completed since Fensa was established, according to the business’ representatives.

Anda Gregory, chief development officer for the GGF Group, said that both problems originated in the IT system that had been in place since Fensa was established. The problems were revealed by the present management team as they started to overhaul the organisation’s systems.

“Fensa has processed more than 15m records since the organisation was created,” Anda explained. “When discovered, the team immediately took steps to resolve the problems and provide appropriate support for homeowners and Fensa-approved installers.

“Ensuring that no homeowner should be disadvantaged by this has been of the utmost importance to both the management team and the board throughout this process. We’re confident that our remedial fund means that that will absolutely be the case.

“New system processes have been put in place to address the matters pertaining to duplicates and IBGs, as set out above. Fensa is a not-for-profit organisation that operates under a licence issued by the government. As such, it is financially secure, with safeguards in place to cover its responsibilities.”

Anda continued: “Fensa is managed to ensure that it has sufficient funds to cover all and any claims made by homeowners. We will be issuing notices on the Fensa website and through other channels to ensure that any claims will be fully investigated and resolved as required. All duplicated fees have been clearly identified and automatic refunds will be made as a matter of course.

“The management team that discovered the anomalies has also introduced fixes and checks to the existing system while work continues on building new systems that will prevent a recurrence of these issues,” said Anda. “With more than 40,000 registrations each month, I am satisfied that Fensa continues to offer outstanding protection for homeowners and unrivalled support for approved installers, with independent governance and oversight provided by UKAS.”

The Consultancy delivers again for Doorco