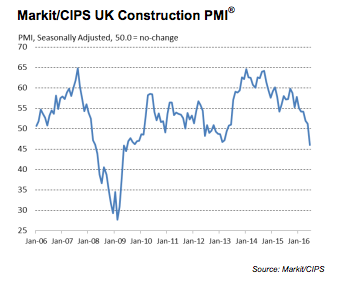 Markit/CIPS June data signalled a return to falling output levels across the UK construction sector, led by a steep decline in residential building and a reduction in commercial work for the first time since May 2013.

With data collected from 13-29 June, reports from survey respondents widely linked the downturn in business activity to uncertainty ahead of the EU referendum (just over 80% of survey responses were received before 24 June). Heightened uncertainty also contributed to a further reduction in new invitations to tender, with the latest data pointing to the sharpest drop in new business volumes since December 2012.

Meanwhile, softer demand conditions acted as a brake on staff recruitment in June and contributed to a drop in purchasing activity for the first time in just over three years. At 46.0 in June, down from 51.2 in May, the seasonally adjusted Markit/CIPS UK Construction Purchasing Managers’ Index (PMI) dropped below the neutral 50.0 threshold for the first time since April 2013.

The latest reading pointed to the weakest overall performance for exactly seven years, but the rate of contraction was much slower than seen during the 2008/09 downturn.

Residential construction was the worst performing sub-category of activity, with activity falling at the fastest pace since December 2012. Civil engineering activity remained broadly stable in June, while commercial building work saw a sharp loss of momentum and posted one of its weakest readings for six-and-a-half years.

Lower levels of activity were overwhelmingly linked to deteriorating order books and a corresponding lack of new work to replace completed projects. A number of firms commented on reluctance among clients to commence new contracts in the run-up to the EU referendum, alongside ongoing uncertainty about the general economic outlook. Incoming new work has now fallen for two months running, and the latest reduction was the steepest since December 2012. Construction firms responded to the deterioration in client demand by cutting back on input buying and exerting greater caution in terms of their staff recruitment. The decline in purchasing activity was the fastest for almost six-and-a-half years.

Employment numbers continued to rise in June, but at one of the weakest rates seen over the past three years. At the same time, sub-contractor usage fell slightly and prices charged by sub-contractors increased at the slowest pace since July 2013.

Despite lower input buying, supply chain pressures persisted in June. Moreover, average lead-times from vendors lengthened to the greatest degree since the start of 2016, which survey respondents linked to transportation delays and lower stocks among suppliers. Meanwhile, the latest survey indicated a drop in business confidence regarding the year-ahead outlook to the weakest since June 2013.

Tim Moore, senior economist at Markit and author of the Markit/CIPS Construction PMI, said: “Widespread delays to investment decisions and housing market jitters saw the UK construction sector experience its worst month for seven years in June. Construction firms are at the sharp end of domestic economic uncertainty and jolts to investor sentiment, so trading conditions were always going to be challenging in the run-up to the EU referendum. However, the extent and speed of the downturn in the face of political and economic uncertainty is a clear warning flag for the wider postBrexit economic outlook.

“House building activity was worst affected by the uncertain business climate in June, very closely followed by commercial work. Civil engineering was the only stabilising influence, which underlines the need to shore up decision making on infrastructure projects and help offset any further loss of momentum across the wider construction sector.

“The vast majority of June’s survey responses were received ahead of the EU referendum, so the worry is that the ensuing political turmoil will hit construction spending decisions for some time to come. As a result, the latest figures raise the likelihood that the Bank of England will inject additional stimulus this summer in an attempt to dampen the short-term impact of Brexit uncertainty on the real economy.”

David Noble, group chief executive officer at the Chartered Institute of Procurement & Supply, said: “Gloom and fragility descended on the sector with the steepest drop in new orders since December 2012. Caused by the continuing insecurities in both the global and UK economies and the hesitancy shown by clients to commit to projects before the EU referendum, overall activity was at its frailest for seven years.

“The housing sub-sector took the most significant hit, with the biggest fall in activity since December 2012. Commercial building was a close second showing a similarly disappointing result, with a drop in activity not seen since February 2013. Delivery times, employment and crucial supplies were also impacted by the ongoing uncertainty.

“Though the majority of responses, around 80% were received before the Brexit result, the continuing ambiguity and indecision has flung the sector into unknown territory. Firms will likely look towards any remedies the Bank of England and the UK government can offer if the situation worsens post Brexit.

“The only glimmer of light through the brickwork is the rate of decline was not as sharp as that experienced during the last recession. But, with business confidence at a three-year low, and purchasing activity at its lowest level for six and a half years, this is likely to offer little comfort.”