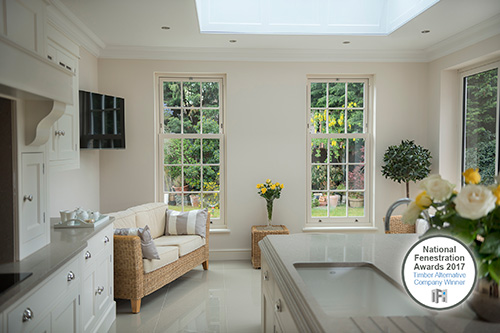 Based in Essex, Masterframe specialises in PVC-U sash windows and has a reputation for quality and attention to detail. The company’s products are regularly specified to replace traditional timber in buildings that need to retain their historic looks, while improving energy efficiency.

Carol Slade, sales & operational director for Masterframe, said “We are especially honoured to receive this award because it is won on number of votes received from the industry rather than a panel of judges. We cannot thank those who voted enough for taking the time out of their busy schedules to help us win this award.”

Neil Evans, Veka Group’s sales director said: “We were very pleased to see Masterframe named 2017’s Timber Alternative Window Company. We know for a fact that they were up against some stiff competition, so the hard work of the team has certainly paid off! With such a commitment to quality and a strong partnership with Halo, we’ll look forward to seeing what else Masterframe might achieve this year.”

Spectus takes ‘authenticity to another level’ with new VS