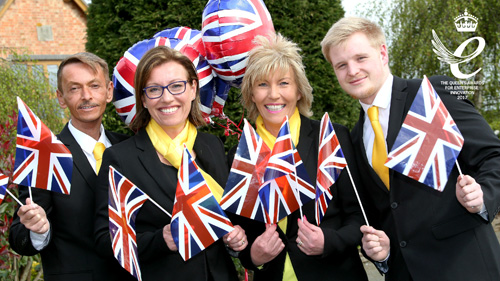 Leicestershire based Jackloc, creator of the original, award-winning universal window and door cable restrictor has been recognised with The Queen’s Award for Enterprise in Innovation.

Established over five decades ago, the awards have propelled UK businesses onto the world stage with an ‘internationally-renowned symbol of excellence’. Awards are presented by Her Majesty The Queen on the advice of the Prime Minister and an advisory committee, comprised of the head of the Civil Service and representatives from government, the private sector and trade unions.

“We are unbelievably honoured to receive the Queen’s Award for Enterprise in the Innovation category,” commented Emma Wells, founder and director at Jackloc. “To be recognised by the highest honour in UK business, renowned across the world is an incredibly proud moment for Jackloc and is the result of our continued commitment to innovation and safety.”

Jackloc was founded in 2003 by Emma and her late sister Deborah, with their other sister Judith Burrows joining as a Director in 2008. The business is built on the pioneering design created by their father Derek Horne, who after speaking with a hotelier who came perilously close to a falling child, created a simple, yet effective window restrictor to dramatically reduce the risk.

“Jackloc has come an awfully long way from working at the dining room table,” added Judith. “We are supplying Jacklocs across the world including seven-star hospitals in Abu Dhabi, five-star hotels in Iraq and we’re working in close partnership with local NHS trusts and leading hotel chains here in the UK. Whilst this award is truly amazing and something we never thought we would receive, our hard work doesn’t stop. We are dedicated to reducing the number of injuries and fatalities across the world caused by falling from windows.”

Epwin partners with Fensa to deliver Excellence as Standard