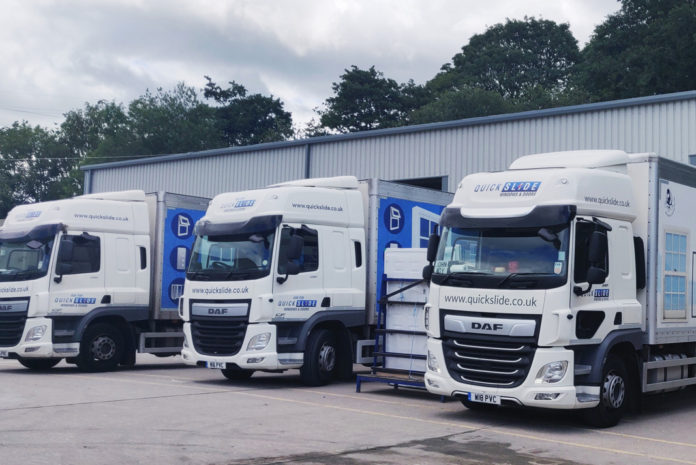 Quickslide’s Brighouse-based production facility has recently benefitted from the fabricator’s ongoing series of investments, this time with the completion of improvements to its dispatch centre.

Over the past 18 months, Quickslide says it has committed to fulfilling a £2m programme of growth, with the most recent phase being work on the new dispatch centre, which was completed in July by Cleckheaton Construction, despite the challenges of lockdown.

The improved dispatch centre has been designed so that Quickslide has one dedicated facility that all finished goods from its multiple factories filter in to. According to Quickslide, this means handling of goods is kept to a minimum, delivery vehicles can be loaded more quickly and safely, and it can service its customers faster and more effectively.

The finished dispatch centre has not only improved the loading processes, its reorganisation is also said to have created an optimised layout and freed up valuable space, which can now be used in the manufacturing process rather than to simply house finished products. There is also now a designated space for training in the new unit, illustrating Quickslide’s commitment to future growth.

The improvements to the dispatch centre complement numerous other investments in efficiency made at the factory, including the installation of a state-of-the-art Schirmer CNC machine, two corner cleaners and two quad welders, plus an expanded vehicle fleet.

Recent changes in shift patterns have also increased productivity, meaning more goods, which can now be better moved out through the newly streamlined dispatch centre.

“The whole new set-up provides us with an extra 30% capacity on one shift or 100% if we run to split shifts,” said Ben Weber, Quickslide’s managing director.

“This flexibility ensures we needn’t endure this irritating ‘yo-yo’ of delivery times and can help our partners out at times of urgency. It also allows more intelligent batching, better optimisation and more efficient logistics, passing on some savings to ensure better margins can continue to be achieved by our installer partners.”