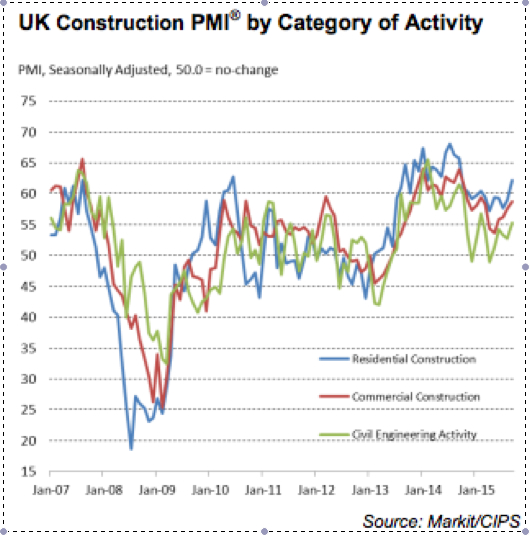 The latest data from the Markit/CIPS Construction PMI survey has shown a further rebound in output growth across the UK construction sector, supported by expansion in residential and commercial construction and civil engineering activity.

At 59.9 in September, up from 57.3 in August, the headline seasonally adjusted Markit/CIPS UK Construction Purchasing Managers’ Index signalled a sharp and accelerated expansion of overall business activity. Moreover, the latest reading was well above the long-run survey average (54.7) and pointed to the fastest increase in output levels since February.

House building remained the best performing broad category of construction activity in September. The latest expansion of residential building was the strongest for 12 months, which some survey respondents attributed to the launch of development projects that had been delayed earlier in 2015. Commercial construction activity also rose sharply in September, with the pace of growth accelerating to a seven month high. Meanwhile, civil engineering activity increased for the fifth consecutive month and the rate of expansion picked up to its fastest since February.

Volumes of new work rose at a ‘robust’ pace in September. However, the latest increase was the slowest for five months and much weaker than the post-crisis peaks recorded in 2013 and 2014.
Construction companies nonetheless remain highly upbeat about their prospects for output growth over the next 12 months. Reflecting this, more than half of the survey panel (52%) forecast an upturn in business activity, while only 6% anticipate a reduction.

Employment growth was sustained across the construction sector for the 28th consecutive month in September. Moreover, the pace of staff hiring remained strong, and accelerated to its fastest since June. At the same time, construction firms signalled another increase in sub-contractor usage during September. Sub-contractor charges continued to rise sharply, although the rate of inflation has eased slightly from the survey-record highs recorded earlier in 2015. Meanwhile, the latest survey highlighted the least marked deterioration in supplier performance for almost five years, which some firms linked to greater stocks at vendors. September data also pointed to softer cost pressures, with the rate of input price inflation easing to a five-month low.

Tim Moore, senior economist at Markit and author of the Markit/CIPS Construction PMI, said: “Construction firms enjoyed a strong finish to the third quarter of 2015, as a sustained rebound in new development projects continued to have an impact on the ground. Moreover, September data suggests that the UK construction sector is still experiencing its most intense cycle of job hiring for at least 15 years, and consequently skill shortages remain a dominant concern across the industry.”

“Residential building saw the most decisive momentum shift in September, hitting a one-year high in the process, while commercial development also picked up speed as rising business investment and improving UK economic conditions acted to bolster demand. A growth spurt for civil engineering activity completed the hat-trick of positive news for
the main construction sub-sectors in September, helped by robust pipelines of infrastructure work.

“While the latest survey provides positive news on construction output, jobs and supply-chains, there was a warning light flashing in terms of total new orders. Construction companies have recorded a steady slowdown in new business growth from June’s post-election peak and the latest upturn was the second-slowest since mid-2013.”

Meet ODL’s winning team ahead of The FIT Show 2017