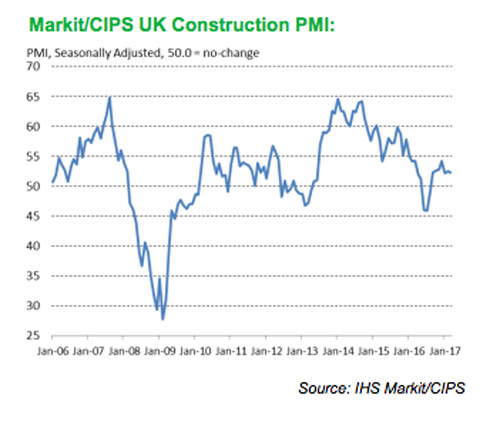 March data revealed a slowdown in growth across the UK construction sector, led by a weaker rise in residential building activity. The latest survey also pointed to only a marginal increase in new work, which contributed to slower employment growth and a slight decline in input buying.

However, construction companies remain relatively upbeat about their near-term growth prospects, partly reflecting a stabilisation of client confidence from the post-referendum lows seen in 2016. Optimism regarding year-ahead business activity picked up in March to its second highest since December 2015.

The seasonally adjusted Markit/CIPS UK Construction Purchasing Managers’ Index (PMI) dropped from 52.5 in February to 52.2 in March, to signal the joint-slowest upturn in overall construction output since the current period of expansion began in September 2016.

Tim Moore, senior economist at IHS Markit and author of the Markit/CIPS Construction PMI, said: “UK construction firms experienced a growth slowdown in March, with the loss of momentum centred on housebuilding. A weaker trend for residential work has been reported throughout 2017 so far, which provides an indication that the cooling UK housing market has started to act as a drag on the construction sector.

“Civil engineering projects were the construction sector’s main growth engine in March, driven by rising infrastructure spending and a strong pipeline of new work throughout the UK.

“Despite a relatively subdued rise in new work during March, UK construction firms reported a more sanguine assessment of their year-ahead growth prospects. Business confidence was among the highest seen since the end of 2015, which construction companies linked to upcoming tender opportunities, plans for increased marketing expenditure and hopes of a sustained recovery in clients’ willingness to spend.”

Duncan Brock, director of customer relationships at the Chartered Institute of Procurement & Supply, said: “Where the housing sector acted as the main engine of growth over the last four years, this month it was slower and stuttering, while overall purchasing activity in the construction sector was disappointingly tame, shackled by a lack of new orders and rising costs.

“This downbeat effect took a small bite out of any strong rises in employment levels, as the increase in staff hiring was at a three-month low. But as the sector showed strong optimism for future business, concerns over the skilled labour availability are likely to persist in coming months.

“Pressure on suppliers remained intense, as they battled against lower stocks and made greater efforts to fight the pincer movement of a shortage in some materials and the continued force of higher global commodity prices.

“Now the trigger has been pulled to propel the UK out of the EU, the construction sector must keep an attentive eye on how the UK Government’s negotiations will play out and whether consumer and business caution returns to hamper further progress.”