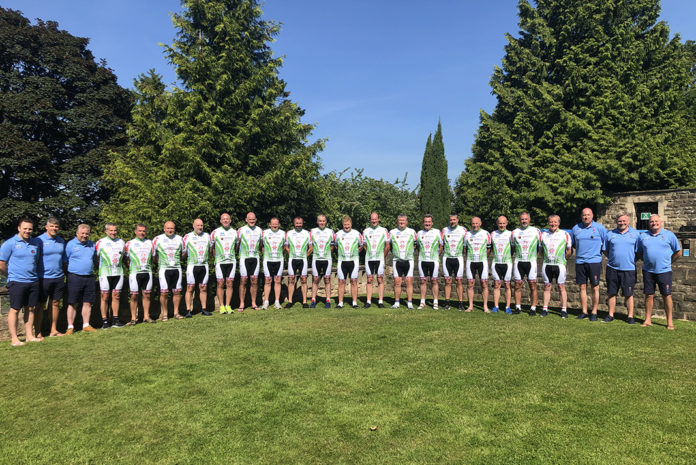 This year’s GM Fundraising cycling challenge, ‘From Russia With Hope’, raised an outstanding total of £208,891.72 for Hope House Children’s Hospices. The event, which included a 2,700 mile ride from Russia to Oswestry, was the seventh and final sponsored ride by GM Fundraising, which over the years has taken on cycling challenges in the UK, Europe and North America, raising hundreds of thousands of pounds for Hope House in the process.

“When we announced that this was going to be our final cycling challenge, we were determined to go out on a high,” said Gary Morton, founder of GM Fundraising. “But, raising over £200,000 is simply astounding. What a way to end what has been a phenomenal journey of cycling challenges over these past 14 years.

“As the last challenge of its kind, we also knew it had to be the toughest,” he continued. “And ‘From Russia With Hope’ certainly exceeded those expectations too. With many trials and tribulations along the way, such as road closures, breakdowns, punctures, torrential rain and soaring temperatures, and much more climbing than anticipated, the team of 24, including 18 cyclists, certainly rose to the challenge – nothing was going to stop us! And our fantastic support team endeavored to keep us all going.

“None of this would have been possible without our headline sponsor, Brisant Secure, who not only covered the overheads of the ride, but were also with us every step of the way supporting in any way they could,” said Gary. “I’d like to thank every person involved – those who took part, supported and helped in any way, to make this a record-breaking event in terms of challenge, monies raised and fun. I’d also like to extend additional regard to those who have been there for GM Fundraising for all, or most, of the rides. We have all gained life-long memories and friendships and that makes it all worthwhile

From Russia With Hope
On Saturday 22 June, the GM Fundraising cycling team arrived at Hope House in Oswestry marking the end of ‘From Russia With Hope’: 10 countries in 12 days, from the Russian border through Finland, into the Arctic Circle, on through Sweden, Denmark, Germany, Holland, Belgium, France, England, Wales, and back into England again, cycling over 2,700 miles, 60,000ft of climbing and upwards of 9,000,000 pedal turns.

Gary concluded: “Through our cycling-challenges we have raised nearly £756,000 for the children and families at Hope House.

“While we might have hung up our cycling clips, the challenge is not over. 2020 is going to be huge year for GM Fundraising with a variety of events taking place including the Gala Dinner, Golf Gay, GMF Cup and the second all-female challenge. Watch this space as we charge on to our target of £2m by 2020.

“Thank you for your continued support. We’re honored to be known as the industry’s charity and humbled by your ongoing generosity.”