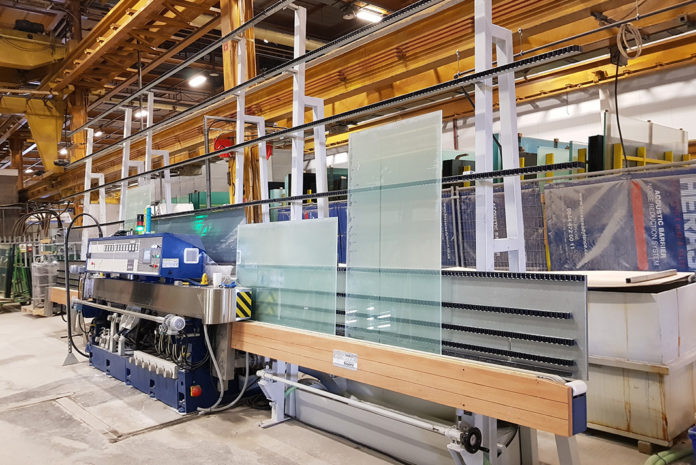 TuffX has announced the installation of three new, state-of-the art machines at its Knowsley manufacturing facility, a move that represents a £300k ‘first phase’ of investment in 2019 for the glass processing specialist, with further infrastructure and equipment planned for later this year.

Following the purchase of a new glass cutting line, and a Bovone ELB 12 HS straight line edging machine last year, TuffX says the latest round of machinery is designed to further enhance the speed, quality and efficiency of its output as part of a long-term growth strategy.

The new machines include a Delta Radius corner grinding machine – which is able to process radius and straight corners up to 20mm thick in less than 30 seconds – a Schiatti drilling machine featuring opposed heads and high-level automation for precision results, and a second Bovone ELB 12 HS straight line edger. Tuffx is said to be the only company in the UK to own two such Bovone machines which can produce flat and arriss profiles at a speed of 4m of glass per minute.

TuffX says it has further plans for another new cutting facility as well as a fourth laminating line to further increase efficiency and capacity, both of which are due to go on-line this summer.

TuffX expanded its factory in 2018 by taking on an additional 15,000ft2, which grew the facility to 70,000ft2 in total. Not only did this allow the company space for new and improved equipment, but it also presented the opportunity to re-organise the factory layout in order to be as efficient as possible.

Paul Higgins, commercial and procurement manager, commented: “We have experienced a period of strong growth at TuffX thanks to a combination of our market leading offering and our high-quality service, and we’re anticipating that growth to continue in the future. The significant investments we have made in order to expand our facilities, plus the introduction of new and impressive machines such as our Bovone straight line edgers, means that we have the equipment and efficiencies in place to meet the increased output that growth will generate, as well as to ensure we continue our enviable levels of customer service.”

Next stop Lagos for Business Micros