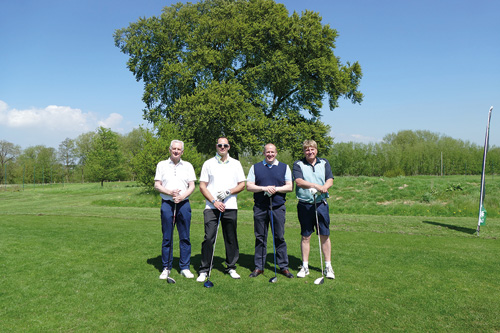 The Conservatory Outlet Network was brought together once again for its annual Golf Open, this year hosted at Mottram Hall, Cheshire, on 9 May.

Nine teams of employees from within the Conservatory Outlet Network of installers arrived for tee off in glorious sunshine ready to take on this year’s battle for the infamous open trophy.

After a dramatic change in weather, and what turned out to be a very wet afternoon, Conservatory Outlet Group member Pennine Home Improvements was announced as the 2018 Winning team, and were congratulated over a 3 Course meal, and a beverage or two.

The ‘Outlet Open’ has been a fixture of the fabricator’s event calendar for five consecutive years, in which time Visual Conservatories and 5 Star Windows & Conservatories have also emerged victorious and had their name etched on the trophy.

Competitors also took on the ‘Nearest the Pin’ and ‘Longest Drive’ challenges at the 3rd and 18th fairways, with congratulations going to Martin Robson, and Neil Miller, also from Pennine Home Improvements, seeing the team of four salesmen from the North-East take home all of the tournament’s prize offerings.