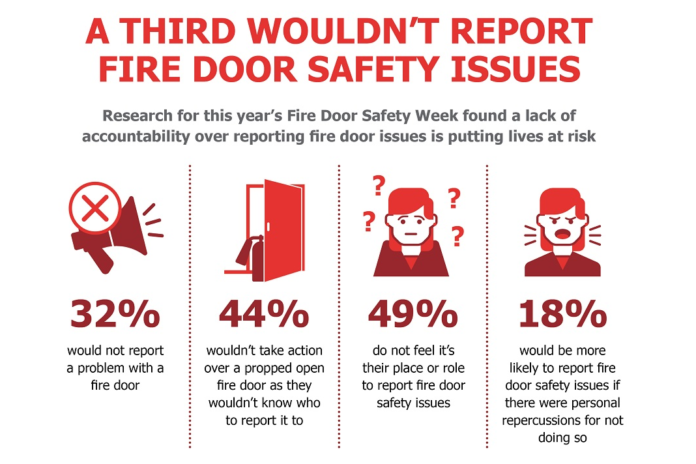 The research promoted by the BWF shows that, despite 75% of British people correctly indicating that propping a fire door open stops it performing its role in the event of a fire, 44% wouldn’t take action over a propped-open fire door. The same proportion (44%) indicated that they wouldn’t know who to report a propped-open fire door to. Almost 49% of the people surveyed indicated that they do not feel it’s their place or role to report such issues.

Helen Hewitt, the BWF’s CEO, said: “There were 243 fire-related fatalities in England in the past 12 months, so individual action really is crucial in preventing tragedies. Fire doors propped open put lives at risk in the unfortunate event of a fire. Without being properly closed, a fire door cannot hold back the spread of fire and smoke to fulfil its life-saving role.”

For 18% of the people polled, a propped open fire door was incorrectly deemed as safe. Further, 15% believed that keeping a fire door closed stops it performing, highlighting a lack of understanding around the role fire doors play in the event of a fire, BHF representatives have said.

Gavin Tomlinson, chair for protection and business safety at the National Fire Chiefs Council, added: “We urge everyone to help keep buildings and their occupants safe and close the door on fire. A fire door can only protect from fire and smoke if it is closed. We ask that if people see a fire door propped open, they close it. It’s a simple ask that could save a life.

“Everyone has a role in ensuring their buildings remain safe from fire. If you have any concerns then please ensure these are reported to the building owner or person responsible for the fire safety of that building. If it continues to be a problem or you are concerned about fire doors in a building, you can contact your fire service for advice and support.”